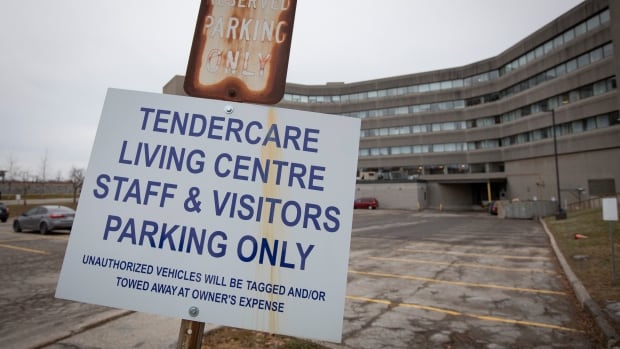 Physicians and family members are raising the alarm over conditions at a Scarborough nursing home, claiming residents aren’t receiving enough water or medication due to a lack of staff amid surging cases of COVID-19.

Tendercare Nursing Home, located near Victoria Park and McNicoll avenues, is currently battling 109 active cases among residents and 49 cases among staff. An additional 26 residents have already died of the virus and 10 remain in hospital.

To date, no resident cases have been deemed resolved.

Dr. Silvy Mathew, a family and long-term care physician who also takes care of nursing home patients, says multiple residents are suffering from various states of dehydration, with an insufficient number of staff available to help them eat or drink.

When she assessed many of them, she said she had to start performing hypodermoclysis — a process that consists of putting fluids underneath the patient’s skin to help hydrate them.

My first reaction was they don’t know what they’re doing and they don’t have it under control. – Jessica Wong

“I had one nurse with me and two PSWs on Sunday for the wing I was taking care of and that’s not nearly enough even without people being sick,” she told CBC Toronto on Wednesday.

Mathew first took to Twitter on Tuesday, having been one of several physicians to visit the home after cries for help over rising cases.

In a series of tweets, she said she lost sleep over what she described as a very bleak and dire situation occurring at the home.

While she commended the staff for appearing to be working “incredibly hard,” she said many more nurses and personal support workers are immediately needed to keep up with the level of care required.

Having heard about the worsening situation at the home, Jessica Wong and her family have decided to remove her grandmother, Jean Cheung, from the facility.

“There are lives there that still need to be saved,” she told CBC Toronto. “There’s not enough staff to help the ones that are positive.”

For the past several months, Wong has been communicating with her 82-year-old grandmother via zoom twice a week.

Then, all of the sudden, those calls stopped coming, and she was warned by the family member of another resident that cases were surging and the home was understaffed.

“My first reaction was they don’t know what they’re doing and they may not have it under control,” she said.

Now Wong and her family are waiting for her grandmother’s next test results.

“Hopefully she’s still negative, we can take her out that same day,” she said.

In a newsletter sent to families of residents on Tuesday morning, the home’s executive director, director of care and manager of retirement residences said they are working with all staff to reinforce all infection prevention and control policies, which include:

While Scarborough Health Network (SHN) has been helping at the home, providing testing assistance, clinical case and physician support, Tendercare remains under for-profit ownership and is managed by the for-profit corporation Extendicare.

In a statement on Wednesday, Tendercare staff confirmed that a management agreement with North York General Hospital will soon be finalized to better help the home fight the outbreak — a “welcome” step to Tendercare staff.

“Our teams will be collaborating with the physicians, clinicians and infection control experts provided by North York General Hospital to clear the virus from our home as quickly as possible, while reducing the current pressures on our staff as they work to care for our residents,” Candy Chan, manager of resident programs at Tendercare, said in a statement.

Meanwhile, the province also said it has conducted its own inspection of the home.

“When homes are in outbreak, the ministry works directly alongside the local public health unit, the local health integration network and all our health sector partners to stabilize them and return them to normal operations,” said Krystle Caputo, press secretary for Ontario’s long-term care minister Dr. Merrilee Fullerton.

The ministry’s report is expected to be made public once complete and shared with the home.

Dr. Nathan Stall, a geriatrician at Mount Sanai Hospital, said he’s unfortunately “not surprised” by the alarming situation that has formed at Tendercare, adding that it’s not an isolated incident.

Stall said the situation is much graver than a lack of staff to prescribe medication and administer oxygen. Now, he said there’re many homes across the province experiencing “large, explosive outbreaks” where there aren’t enough people to feed or change residents on a reliable and timely basis.

“If you take out half your staffing cohort when you don’t backup, you’re going to run into huge troubles.”

‘This is certainly a tragic situation,’ John Tory says

Asked Wednesday if the military should be called in to help assist Tendercare, Toronto Mayor John Tory said long-term care is principally a provincial issue and that they would work with the home’s administration, as well as hospital partners, to determine if further steps need to be taken.

“This is certainly a tragic situation,” Tory said.

“So if advice is offered that we should ask for help I’ll certainly do my job in making that request for extra help.”